The Utah Department of Transportation (UDOT) is constructing a new interchange on I-15 at 1600 South/2700 North, realigning adjacent frontage roads, and improving 1600 South/2700 North from Main Street in Spanish Fork to State Street (SR-51) in Springville. The project will alleviate congestion on mainline I-15, the 400 South Interchange in Springville and on US-6 in Spanish Fork and improve safety on 1600 South/2700 North for walking, biking and driving. UDOT is designing and preparing to construct a portion of the 2050 solution identified in the environmental document. This project overview focuses on elements that are scheduled for construction by 2025. 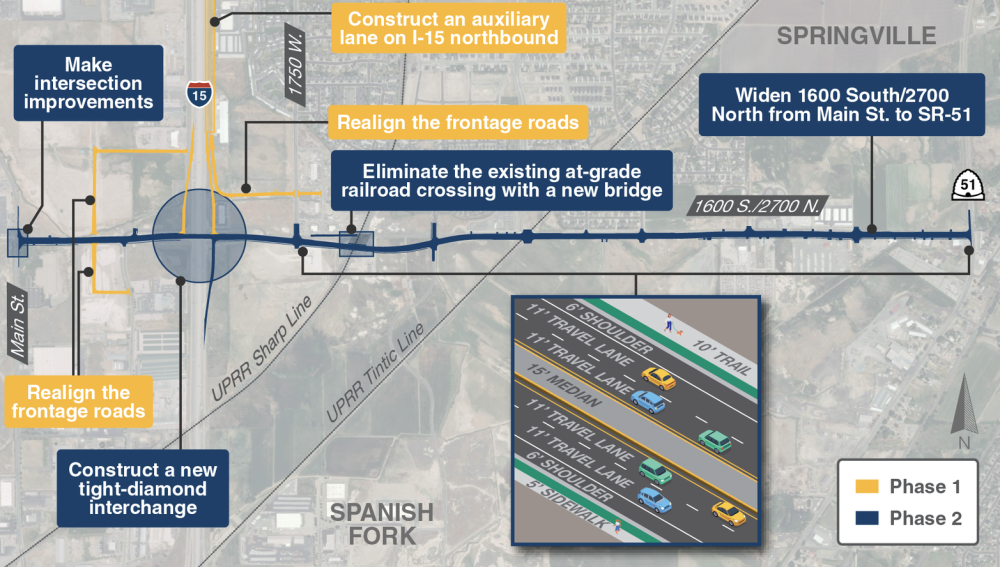 Click here to view a 3D model of the project design.

The frontage roads will be operational by the end of Phase 1.

The interchange and new I-15 ramps will be operational by the end of Phase 2.

*Construction schedules and phasing are subject to change. A finalized schedule should be available in early February 2023.

For more information, contact a project representative to ask questions, set up a meeting to discuss your property and/or request a public hearing.

This Element Represents Embedded JavaScript
The questions marked with a red border are required.